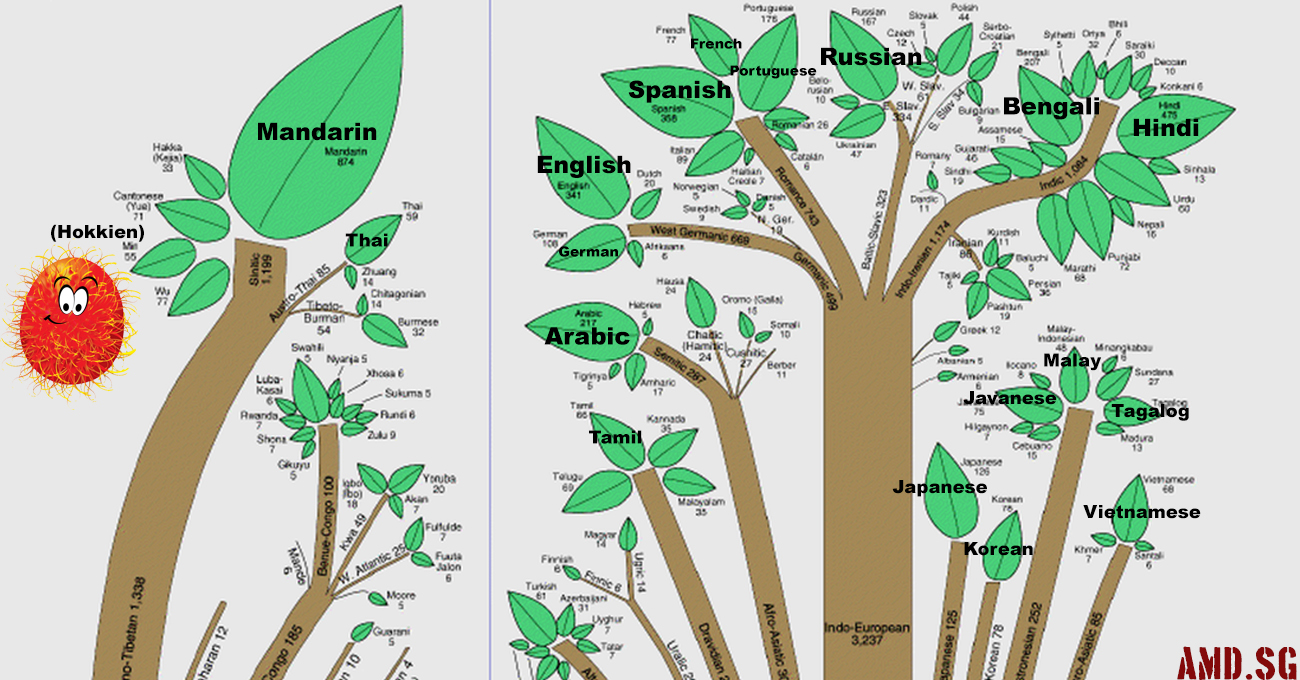 There are thousands of spoken languages in the world and most can be traced back in history to show how they are related to each other.

By finding patterns like these, different languages can be grouped together as members of a language family.

There are three main language families:

Indo-European is the largest language family, followed by Sino-Tibetan, and lastly Afro-Asiatic. The Language Tree below shows languages that come from the same origin. (sorry about the quality. I’ve relabelled some popular languages) The numbers on the tree below are in millions of native speakers. NB: “It has been suggested that Thai could be part of the neighbouring family called Austronesian, rather than the Sino-Tibetan family. Perhaps the similarities that Thai shares with Chinese are due to borrowing, not descent from a common ancestor.” – Peter Thomas

Mother language of all languages

A hypothesis put forward by Professor Joseph Greenberg and his colleagues (Stanford University) holds that the original mother language developed in Africa among early Homo sapiens. Their ‘Proto World’ map would show how Homo sapiens spread across the world, taking their language with them. That single language, which the Professor calls the Mother Tongue or proto-world, diverged naturally over time into the several thousands of diverse forms spoken today. Read more here

An idea of of what this tree would look like is shown below:

One ancestral language, spoken at least 15,000 years ago, gave rise to seven more that formed an ancient Eurasiatic “superfamily”. These in turn split into languages now spoken all over Eurasia, from Portugal to Siberia. Read more

Sino-Tibetan is one of the largest language families in the world, with more first-language speakers than even Indo-European. The more than 1.1 billion speakers of Sinitic (the Chinese dialects) constitute the world’s largest speech community. Sino-Tibetan includes both the Sinitic and the Tibeto-Burman languages.

Hokkien is the oldest Sinitic language alive today. It provides an invaluable resource for scholars of ancient Chinese as well as comparative Sino-Tibetan. Mandarin and other Chinese dialects such as Cantonese have gone through the “middle Chinese” phase, Hokkien did not. She is a direct descendant of old Chinese. Read more

As far back as 18th century it was suggested that similarities among languages such as Sanskrit, Greek, Latin, Gothic, and others were so striking as to suggest that they had sprung from a common Proto-Indo-European language. By the 19th century, August Schleicher’s Family Tree had been proposed to model the relationships among the Indo-European languages as the branches of a tree. English is branched off Germanic.

The picture below shows how the Indo European Language Family tree branch comes from the main mother tongue trunk. Another beautiful illustration of the Indo European Language Family tree from Minna Sundberg. The original mother tongue may never be found. It becomes increasingly difficult to distinguish between inheritance from a common ancestor and borrowing from another group. There are no written records, so we can never know if word similarities happened by sheer chance or by accident.

However, what is known about the main language groups is still fascinating, such as: