Skip to content
Home > Language > Vocabulary > 5 Singlish Words That Have Nothing To Do With Sex, Drugs and Violence

5 Singlish Words That Have Nothing To Do With Sex, Drugs and Violence

It was a cock night full of mugging, I just wanted to stone. Damn shag leh.

It was a rubbish night full of cramming for exams, I just wanted to do nothing. Damn tiring.

Just for a bit of fun, we’ve chosen five words that are related to sex, drugs and violence in (informal) standard English, and totally innocent in the context of Singapore Singlish.

To cut something into pieces with repeated sharp blows of an axe or knife. It can also be a thick slice of meat, especially pork or lamb. Refers to a stamp or seal, and to stamp a document. The word ‘chop’ was originally from the Malay word cap, which is from the Hindi word छाप ćhāp (stamp).

The use of the word ‘chop’ to mean ‘stamp’ is unique to this part of the world, so please be careful, business people in the West will be quite confused.

The adult male of the domestic chicken, and other male birds. Also a vulgar slang for penis.

The Royal Society for the Protection of Birds have banned the use of the word “cock” as applied to the male species, in case it causes offence. Read more

Talk cock – to talk nonsense. Also a way to describe something as being nonsensical or sub-standard. It may have been derived from a combination of the English slang “cock and bull” and the Hokkien “kong lan-chiau oe”. The use of ‘cock’ is actually fairly benign, even though it has obscene connotations. It’s like saying “rubbish” or “junk” in standard English. Some examples: “Don’t listen to him, he’s only talking cock.” “Wah lau, you go and buy this cock thing for what?” “Why you so cock, go and invest in that dot-com?”

Attack and rob (someone) in a public place: “he was mugged by three men who stole his bike” 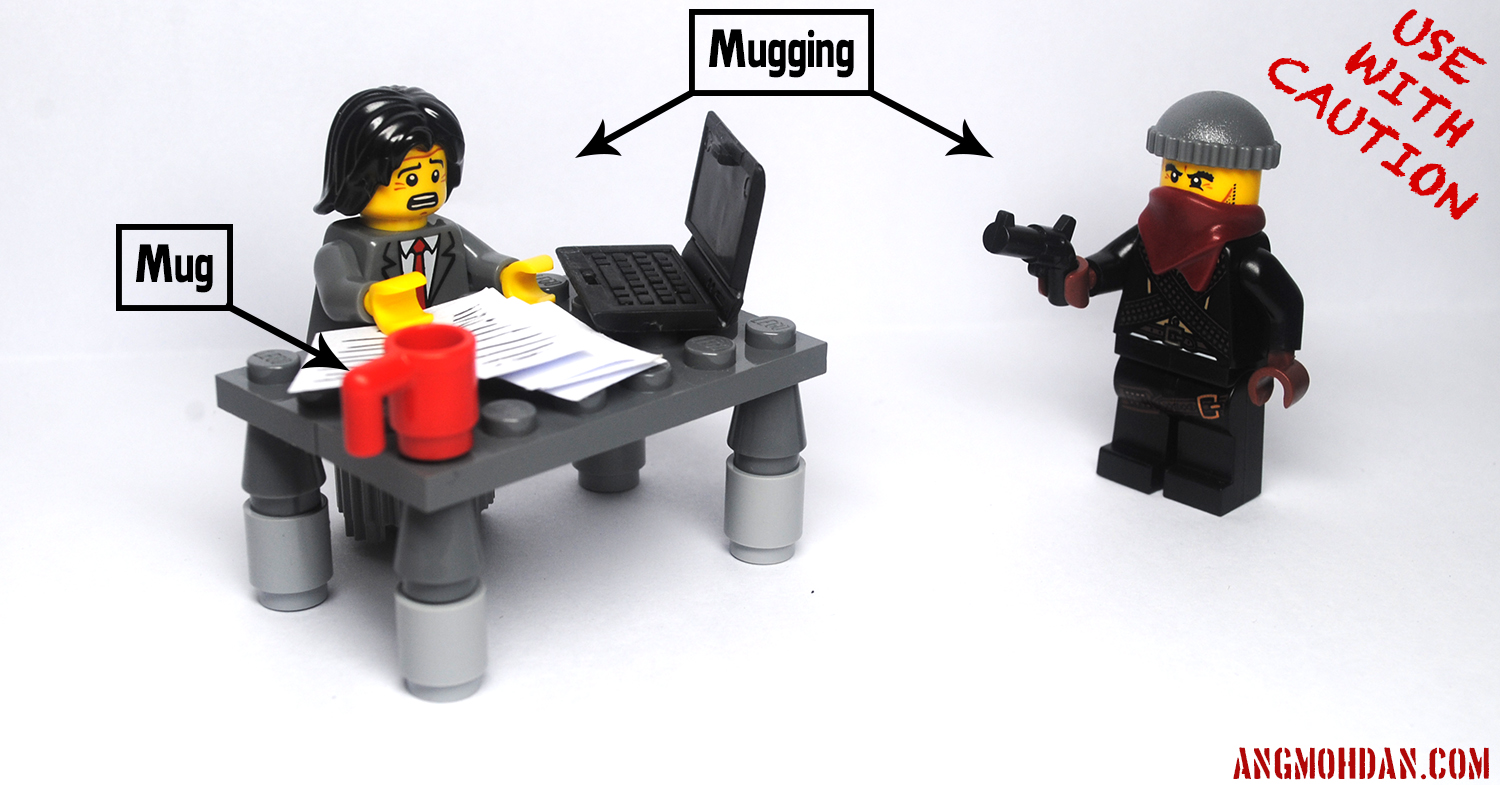 “Last night I mug so much, so sian already”. (to mug is to cram for an examination. sian is an adjective for “bored/tired”.) A mugger is thus a hardworking student who memorises notes and regurgitates them during exams. “He everytime go library until it close. Damn mugger, siah!”

More information about the history of the word ‘mug’

British vulgar colloquialism meaning: to have sexual intercourse with.

To be extremely tired. To be honest it should be spelt ‘shack’, however it is often misspelled and mispronounced as ‘shag’ in Singapore. This is due to the voiced ‘g’ sound and voiceless ‘k’ sound not being distinctly articulated. “Damm shag lah”

If you said “I’ve got severe sleep deprivation because of this shag week”, a British person would congratulate you 🙂

A state of mind which occurs after smoking enough marijuana to the point where the user stares blankly into whatever catches his/her attention, and giggles.

Conveying either a lack of any activity, a state of stupor or stunned bewilderment. While it may owe its origins to it, the local use of the term seems to lack any connection with drug-use.

If you say you are stoned in the UK or the USA you may be hassled for some weed.